Publications by Trustees and DWL Staff.

Here the editors of this major collection explain the significance of marking the contribution made by Dissenters from the Church of England to the history and development of charity and philanthropy in Britain from 1660 to the beginning of the twentieth century. 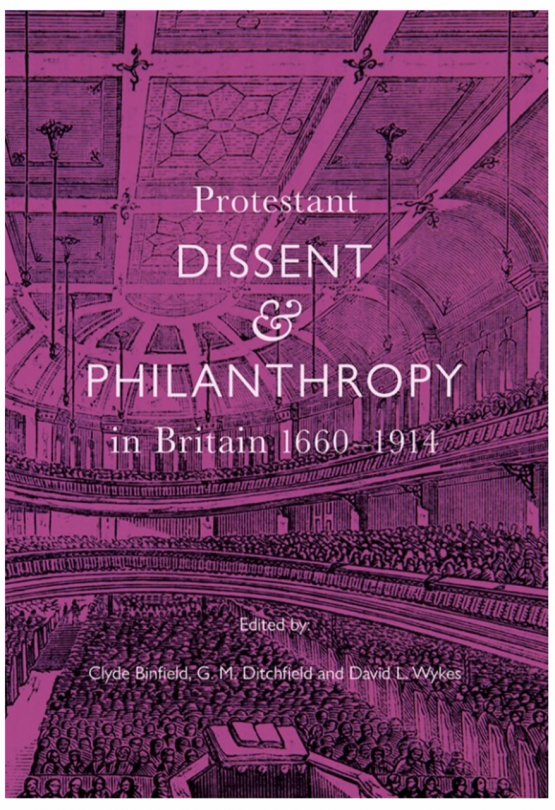 We have just published a volume with the Boydell Press on Protestant Dissent and Philanthropy: eleven essays by leading scholars in the field. Our book marks the tercentenary of the Trust founded by a Dissenting minister, Daniel Williams, who died in January 1716. Today he is chiefly remembered because of Dr Williams’s Library, now in Bloomsbury’s Gordon Square, London, named after him and intended to accommodate for the benefit of posterity his large library. His benefaction was far greater than this might suggest. Indeed he was one of the most important early benefactors of Dissent. His charity encompassed Scotland and Ireland as well as England and Wales, and extended to New England and the Caribbean His estate in 1716 exceeded £50,000, although much of this was distributed to various charitable beneficiaries and only the residue was left to his Trustees. Even so, the Trust and Charity established under his will still exists, largely on its original benefaction.

Our volume, Protestant Dissent and Philanthropy, was one of several activities organised in 2016 to commemorate the tercentenary. They included the commissioning of a history of the Trust by Dr Alan Argent; a celebratory lunch for staff, volunteers, Friends, and distinguished guest; a visit to Dr Williams’s tomb in Bunhill Fields, replicating visits in 1816 and 1916; and a well-supported conference. In addition to Dr Argent’s official history it was felt that a volume of essays on the broader theme of Dissent and Philanthropy would also be an appropriate commemoration, especially as we found that there had been no previous such study, notwithstanding the subject’s importance for understanding both Dissent and Philanthropy. We believe that it fills a gap in the history of both.

In commissioning the essays we sought breadth as well as depth. We wanted to cover the period from the Restoration of Charles II in 1660 to the beginning of the twentieth century, to include the main Dissenting denominations (particularly Baptists, Congregationalists, English Presbyterians, Unitarians, and Society of Friends), and to extend our coverage to Methodists. We also wanted to explore as complete a range of philanthropic activity as possible. The theme of philanthropy is central to the illumination of the social, religious and political history of Britain between the Restoration and the end of World War One. The numerical strength, increasing wealth, efforts and leadership of the Protestant Dissenting denominations placed them at the centre of philanthropy in these years. We believe our book demonstrates the contribution made by Dissenters to philanthropy and what was distinctive about it.

CLYDE BINFIELD is Emeritus Professor in History at the University of Sheffield. His publications have concentrated on nonconformist history, in particular its social, cultural, and political contexts, from the late eighteenth century to the mid twentieth century. G. M. DITCHFIELD is Emeritus Professor of History at the University of Kent. His publications include The Evangelical Revival, George III. An Essay in Monarchy, and The Letters of Theophilus Lindsey (1723-1808). DAVID L. WYKES is Director of Dr Williams’s Trust and Library. He edited Parliament and Dissent with Stephen Taylor and, with Isabel Rivers, Joseph Priestley, Scientist, Philosopher, and Theologian and Dissenting Praise.